Second Harvest distributes millions of pounds of food annually to serve people facing hunger in our region. In 2021, over 40 million pounds of food was distributed to partner food pantries, meal sites, and other programs. To ensure that the food we give out is high-quality and nutritious, Second Harvest gleans and sets aside products that no longer meet our quality standards. Food that was set aside made up about 2% of the total food distributed by Second Harvest in 2021.

To divert this food from a landfill, Second Harvest has partnered with nine local farmers who use it to feed livestock and compost. These farmers pick up product anywhere from once a week to once a month, feeding it to pigs, cows, chickens, sheep, and even worms. One of these farmers, Lyle Murray, has been picking up this product for around five years to feed livestock on The Murray Family Homestead. 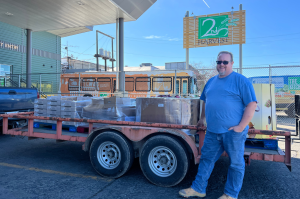 Lyle Murray picking up food from Second Harvest that will be used to feed animals on his family’s homestead.

Located in Springdale, Murray and his family started homesteading about five years ago and got in touch with Second Harvest shortly after. “We’ve been very active and very faithful with Second Harvest, coming almost weekly that entire five years. There’s probably been only 10 or 12 weeks out of that whole period where we didn’t come and get a load,” Murray said. Usually, the food the Murray family picks up is used to feed to their pigs, but occasionally some will be fed to their cows, sheep, and chickens.

Second Harvest has been partnering with farmers for over 20 years to put this food to use, and together in 2021 we prevented about 380,000 pounds of food from being sent to a landfill. “It’s a win-win, we’re able to put it into our livestock and then that turns into food for our family, but Second Harvest also doesn’t have to throw it away,” said Murray.

The goal of passing on this food is to create less waste as an organization while providing product farmers and homesteaders like the Murrays can utilize on their land. “The benefit to us is the volume and the diversity of livestock food that I can provide to my animals. That saves on our expense, and I know what I’m putting into the animals. We’re not stuck with a lot of commercial feed or chemicals and medications,” Murray explained. “For Second Harvest, they don’t have to pay to waste all this product. They can count on our availability, our flexibility, to come down and take a certain volume on a weekly basis,” he said.

Partnerships with The Murray Family Homestead and others help Second Harvest extend the life of food in our warehouse and reduce waste. “That’s as simple as it gets, it’s win-win. It doesn’t have to go in a landfill, and we get to feed our animals,” said Murray.