This week, Second Harvest provided over 13,500 Thanksgiving meals to community members in our service territory. Through Tom’s Turkey Drive (in partnership with KREM2 News) and three Turkey Drives in the Mid-Columbia and Yakima Valley regions, Second Harvest sent thousands of families home with Thanksgiving meal boxes full of ingredients like potatoes, stuffing, and a turkey. These events are a true example of what can be accomplished when a community comes together with a common goal: making sure neighbors have a Thanksgiving meal on the table. 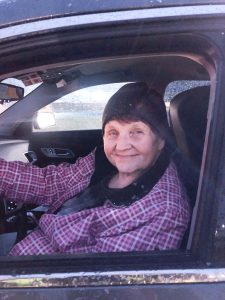 Before Tom’s Turkey Drive began at the fairgrounds, we had the opportunity to speak with some recipients about their holiday plans. Joanne, who recently moved to Spokane to be closer to family, was picking up a box to share with her son, grandchildren, and great-grandchildren. Joanne heard about Tom’s Turkey Drive on KREM2 News, and shared that she was most excited to cook her turkey. “When I got to thinking about the price of groceries and stuff, it was becoming overwhelming,” she said. “With having moved, things are just really tight. This is truly amazing. I don’t know how long this has been going on, but I can’t believe how well set up it is.” 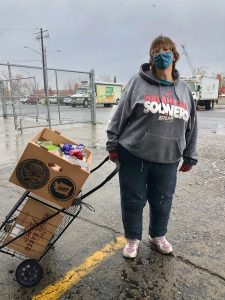 While the drive-thru event was underway at the fairgrounds, a walk-up distribution of Tom’s Turkey Drive meal boxes was held at Second Harvest, in partnership with Spokane Transit Authority. Here, roughly 400 recipients received meal boxes. One recipient, Paula, was collecting a box she planned to share with her neighbors, “I live in a Catholic Charities apartment building. A lot of them have no family and no ability to cook a turkey, and I bought a crock pot big enough.” Paula shared with us her favorite part of Thanksgiving, saying, “It makes people stop and think about at least one thing, they have to grasp it sometimes, what they’re thankful for… I’m thankful I have someone to share this food with.”

Also this week, on Monday and Tuesday, Second Harvest hosted three Turkey Drives in the Mid-Columbia and Yakima Valley regions. Events on Monday in Yakima and Sunnyside each distributed 700 Thanksgiving meal boxes full of canned fruits and vegetables, apples, potatoes, carrots, milk, Franz rolls, Franz stuffing, crumble topping, French onions, and a 12-14-pound turkey. Vanessa, a healthcare worker who attended the event in Yakima, picked up meal boxes for herself and her mother. “I think this is a wonderful program. It helps a lot of people in need who just don’t have the money right now. And to be able to pick up for my mom? I’m just so appreciative. Thank you.”

Meal boxes are loaded into cars during the distribution in Kennewick

On Tuesday, 1,000 meal boxes were distributed in Kennewick. Although the drive-thru event began at 11 a.m., recipients began lining up at 7 a.m. One of these recipients, Barbi, is retired and on a fixed income. “What an amazing free blessing this is, because we’re raising two grandchildren, because God has blessed us with that. Every little bit helps out, and the volunteers are extremely awesome and work so hard for us! We really do appreciate all the work they put into this,” she said.